Why We Should Ban Balloon Releases

This is a highly emotive topic for the balloon industry. There are those balloon professionals who no longer support, or condone, nor facilitate the deliberate release of balloons into the atmosphere, and those who believe that when conducted properly, and with the right materials, latex balloon releases are harmless to wildlife and the environment.

But I would like to start this post with a few thought-provoking words from Chris Adamo, CBA, of Balloons Online in Sydney, Australia.

“Our industry is on the brink of a new era. We really do face the risk of loosing our jobs and our wonderful community through misinformed policy makers. We need to accept the situation and take proactive action to future proof the balloon industry. Banning balloon releases and educating the public on best practice latex disposal is something we all can decide to do, something we can all agree on and start today so we can once again concentrate on the positive story that balloons so naturally exude.”

So what is all the fuss about?

Many environmentally conscious organisations and private individuals expressed a real concern on what harmful effects latex balloon releases might have both as litter and to wildlife through ingestion.

This concern has extended well beyond the environmentalists and is now one of the hot topics for governments and councils around the world, many who have already banned balloons or are calling upon balloons to be banned. Some talk about balloon releases, whilst others talk about a complete ban of balloons – this is scary!

It cannot be disputed that balloon releases cause litter – “What goes up, must come down!”

But are there any substantiated facts as to what actually happens to a latex balloon once it has been released?

A recent report indicates that of those latex balloons that could be traced after a monitored balloon release, approximately 12% burst into small pieces, and 81% were recovered with half of the balloon mass intact. Another study suggests – “Wwhen a latex helium balloon reaches the low temperatures within that 5-6 mile altitude range, it will actually freeze. The elasticity of latex decreases significantly in low temperatures, so the helium balloon that was expanding suddenly becomes incredibly brittle.
What happens next is not the traditional pop that you and I are used to seeing, but instead something simply called “shattering.” The helium balloon breaks in a manner that is similar to smashing a mirror, and all that is left are very small pieces of cold latex that sprinkle back down to the planet (It’s said that these shattered pieces are too small to pose any threats to animals because they are easily passed through the system if ingested.)
Of course, there are exceptions. Variables that can throw a hitch in these rules include poorly manufactured or flawed latex, latex that is unable to expand significantly or expands too quickly, helium balloons that are not fully inflated, or the altitude and climate of the place from which the balloon was released.”

Every day we are seeing more and more negative reports about balloons and the environment, and yes, many of them are untrue or unsubstantiated.

“All released balloons, including those falsely marketed as “biodegradable latex,” return to Earth as ugly litter. They kill countless animals and cause dangerous power outages.” – Balloon Blow – Don’t Let Them Go

The problem that we have is that most people – the public – cannot distinguish between types of balloons. For them, a balloon is a balloon whether its latex, foils, or otherwise, and therefore any released “balloons” are polluting our planet.

So as an industry, what can we do to change public perception?

I believe like so many other balloon professionals that we need to unify as an industry and show that we are responsible and that we definitely care about the environment, and for that reason, we need to do something positive that proves it.

There are several groups and organisations that are working very hard to make this happen. 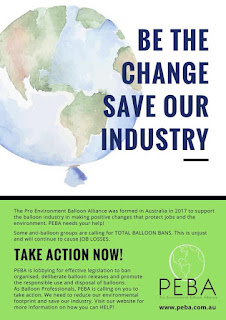 PROMOTE THE CORRECT DISPOSAL OF BALLOONS

Members of PEBA will continue to educate their clients, venue managers and the general public, by all possible means, in the correct disposal of balloons and strongly support BASA’s “Pin it and Bin It” campaign.

INFORM AND EDUCATE
PEBA will actively promote the positive environmental aspects of balloons, while presenting a balanced view to members, the public and any authorities, on all matters pertaining to balloons and the environment.

Don’t let go – we love the environment too! 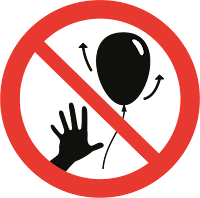 “We have requested that our members do not release balloons and we urge the public to ‘Don’t let go’. Please read our tips on our ‘How to handle balloons’ page and dispose of balloons responsibly.”

Balloons are a unique much-loved product and are considered irreplaceable in what they offer. Over the last few years, the industry has seen changes in consumer viewpoints and perceptions related to such products. Although these changes and increased participation have surfaced in the last few years, the rise of social media platforms and technology has enabled better reporting of such viewpoints and perceptions.

To comply with the EBPC mission statement, “To educate and promote the fun use of balloons and party products safely, ethically and in respect of the environment”, and as a responsible organisation shaping our industry, we recognise the impact of our products within its marketplace. This monitoring, along with our corporate social responsibility, has led the council to pioneer new thinking within our industry on how balloons should be handled in respect of the environment, which has led to an agreement that ‘the EBPC does not support balloon releases’ as we wish to protect the environment from unnecessary litter. While latex balloon releases are visually appealing, the resulting deflated or partially inflated balloons that return to the ground is visually offensive to many, and we must respect this. This is becoming even more important as local authorities across the world are introducing penalties for balloon releases on their land or property.

The EBPC provides a united front to protect and grow the industry by promoting and facilitating best practices through the coalition of its members across the EU. We look to all members to support our stance in this good cause and encourage promotion of this positive message with respect to the environment.

What’s happening in the animal world?

We cannot say for sure how many animals are affected by balloon releases. There are many reports of the same instances. However, during research at EBPC in 2016, we have identified less than 6 cases since 1885 where evidence has suggested balloons to be the cause of an animal death. This was in line with the findings of research by DEFRA in 2013.

Unfortunately, we have also found evidence of misleading claims and repeated instances of the same photographs, or pictures that have been doctored and used for bad publicity of balloons. To reiterate, we love the environment and wish no harm to any form of life.

Don’t let go – our message to consumers is clear

We are an evidence-based organisation and only work with facts. If you would like more information about anything on our website, please get in touch. 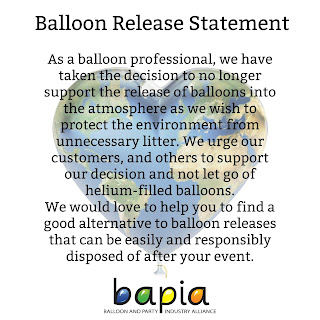 “BAPIA has taken the decision to no longer support the release of balloons into the environment. This decision has been taken based on the feedback from our members who have told us overwhelmingly that they feel balloon releases are not good for the environment and that they would totally support this decision. We would ask all members of the public to follow this lead and don’t let go of helium filled balloons as it can have a negative effect on the environment. We know that our members will be happy to discuss alternative creative options with their customers. Enjoy balloons responsibly!”

At this time, we still have a choice, and whether you join PEBA, EBPC, or BAPIA, and follow their lead and choose not to release any balloons is your decision. But as Chris  Adamo and many others are saying, our industry is on the brink of a new era, and to be honest we need to change with the times. And as Chris said to me – “things that once were considered okay to do are no longer considered acceptable – remember sitting on a plane where people smoked or traveled in a car without a seatbelt?” 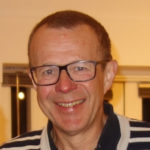